I took a cab to a camera shop in Denpasar (biggest city) last week to see if they could fix my camera. No one at the Denpasar location spoke english. I was lucky enough to be with a balinese driver, Made (pronounced Mah-day), who is the regular driver for a friend I’ve met here. I’d hired Made to get through several errands: easier than trying to hail a cab every time I stop and the price is usually cheaper that way. Through Made’s translation I found out my camera would need to be sent to Jakarta, it would cost $200 to fix, and no one knew how long it would take other than “a long time”. So, I bought a new camera for $80. Two days later I finally realized I had not been given the USB cable that served 2 functions: charging the battery and being able to download photos to the computer. Duh.

To shorten up the story: the Denpasar store said they still had the cable and, they agreed to drop off the cable at a mall with a branch store that was more convenient for me. Yay! I finally downloaded the photos from the memory card yesterday… which included photos from waaaaay back when my original camera stopped working.

So many things I haven’t put up yet… I’ll just try to get started.

These photos cover 2 different days. One set is from the rice fields around Ubud, but this first batch that looks intensely green is from the Unesco World Heritage site, Jatiluwih Rice Terraces. I took a day trip with another girl to visit this area.When the fields are flooded, that seems to be a prime time to take photos since the water is reflective and adds another dimension to the terracing. (you can Google those)

The first shot is me. 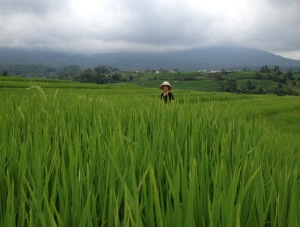 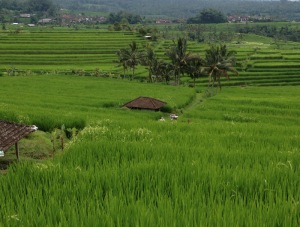 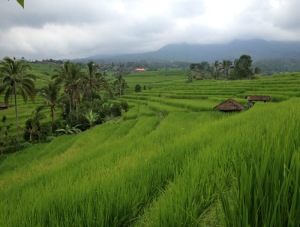 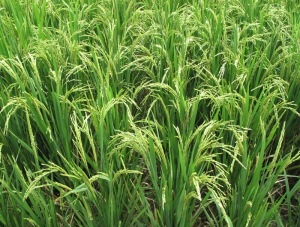 This shot is an attempt to show you the distance from one level to the next in the terracing. This varies depending on the topography, but in many cases this was a 3-4 ft. drop. I did not see concrete reinforcements, just a dirt wall with grass growing. If there is something reinforcing it on the interior it was invisible to me. On several occasions I have seen people hand-cutting this with machetes to keep it trimmed.  Nothing was blocked off from access so we were free to walk on them and they did not give way. These ledges aren’t exactly sidewalk width though. Watch your step!

Below are photos of workers in the field. Our driver was kind enough to stop as we passed this area so I could photograph some real life examples of work in the rice fields. The traffic noise drowned out my ability to hear the driver detailing the process but I think this first photo was sort of like a rice nursery. Men were taking up rice-lings from the nursery (Photo 1), bundling them (Photo 2), and then the bundles are taken out and planted (Photo 3) and I believe this is a freshly planted field (Photo 4). Kinda looks like razor stubble. 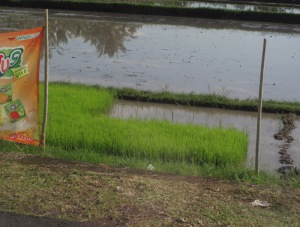 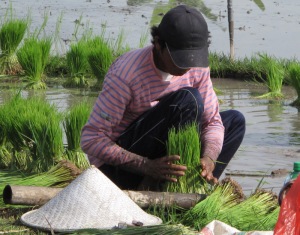 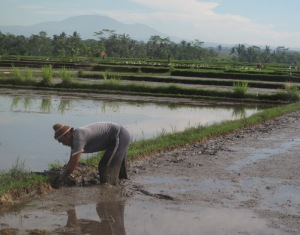 These ladies are knocking the rice grains off the shaft. They would whack the bundle a few times, maybe 3 or 4 times, and then go get another bundle. This photo was shot the same day I shot the planting photos above. The fields are rotated so you have planting and harvesting going on all at the same time. I think they get 2 or 3 harvests a year and they also rotate crops so it isn’t always rice. 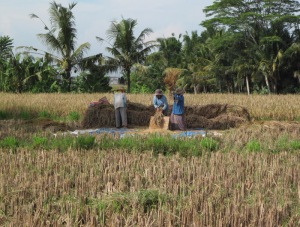 Speaking of rice fields, my second hotel was in a rice field. The path you see cutting through the field was the only path to get there. Looks pretty unassuming from the front, but out the backside of the hotel was a lush valley of palms & greenery. This was the view from my room. 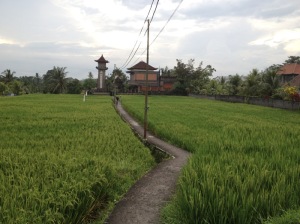 Several mornings I saw a woman come through the fields with something in her hand to try to scare away birds from eating the grains. I saw a variety of approaches to scarecrows. 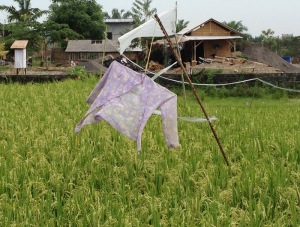 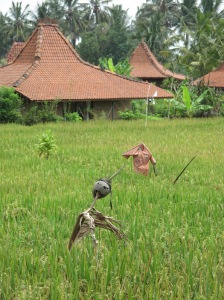 Now we’re to the rice fields around Ubud. I took some video of my friend Kayla and I walking around one day but I think I need to reduce the size of the files to get them to post. So, for now, here are photos.

This first photo with the guy carrying a ladder sums up the situation. There is no other way to get things into the rice fields other than on these little paths. So these next photos of houses… think about it! 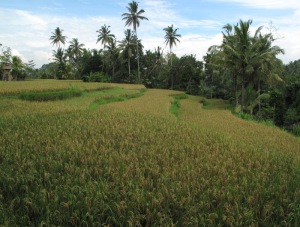 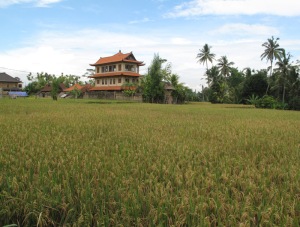 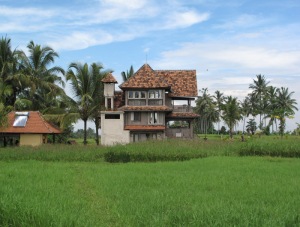 Roads may be wide(ish), or not so much. 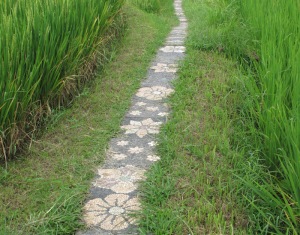 This was our goal destination that day: Sari Organic, a restaurant smack in the middle of the rice fields. Paths weren’t well marked so we did a good 2-hr trek before we found the place which is actually only a 20 min. walk out of town. It was an interesting walk!

You initially walk up a set of stairs, leave your shoes (had that photo in an earlier post) and you see this super cool concrete floor. Remember this color? Just look back 1 post to Sadus tiles. I made it easy and included the photo below this one. 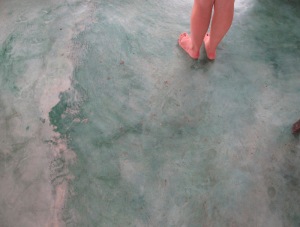 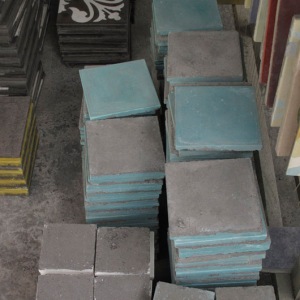 You can choose from traditional seating and sort of private seating in little huts. But the reason few people are sitting there is because there is another area with a view to the fields…

… that’s where everyone is! 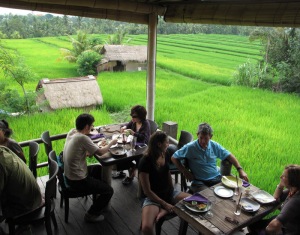 I’ll try to increase my posting frequency now, and aim for shorter posts! Thanks for following 🙂

View all posts by jodyt2

3 Replies to “Rice Fields of Bali”