I thought I was going to base myself in Ubud, but nope. I’ll admit I got a much better sense of the Balinese culture there: smaller town and less aggressive sales tactics, so it was a good place to start the trip. But now that I have seen Seminyak, this is where I have to be for awhile.

So—here’s my new place for the next month!

Anyone who knows me shouldn’t be surprised that I had to draw this one out (no measurements, just eyeballed). I like the layout and want to remember it. There is a cross axis that works really nicely, and then there are 2 bedrooms with ensuite bathrooms that mirror each other. (I only show the one I’m staying in as they are just decorated slightly differently.) 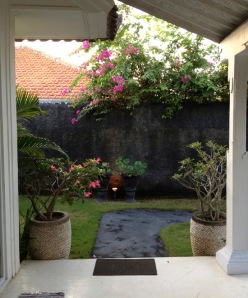 Same area shown below, just from opposite ends. 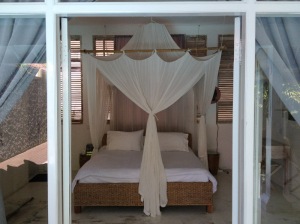 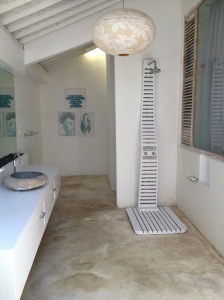 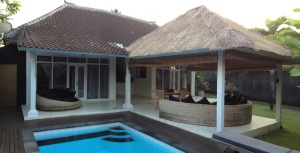 A variety of printed (uh… not necessarily original, but still interesting) artwork hangs throughout the space: 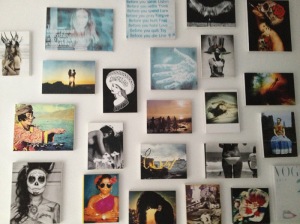 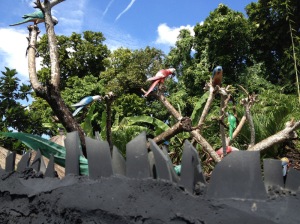 The compound is walled but gets plenty of sun so I’ve taken advantage of the pool both days I’ve been here. I sure wouldn’t want to see what happens to someone who attempts to climb over these walls though! Bordering 2 sides is a french restaurant and the other two are private residences—no walls border a public street. I like the music that floats through from the restaurant, the bell ring I hear when food is ready, and the generally quiet chatter.

Finally, to get around I needed some wheels! The management company was nice enough to send over a bike, but I am going to keep searching because this one isn’t exactly sized for me. 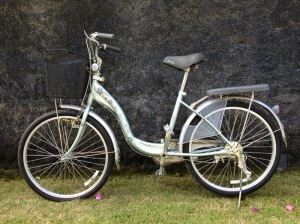 I also didn’t get a lock with the bike so that was project #1 for the day. There is an interesting deterrent lock already on the bike that allows you to lock the front wheel in an angled position so someone can’t ride, except in a circle! But I still hoped the bike wouldn’t disappear while I was in the store. I had the management assistant Dolla, write down the words for “bike lock” in bahasa indonesian. I then was able to show this piece of paper at the store rather than waste time trying to pantomime my request. “Gembok sepeda” was the ticket. I was surprised that all the store carried were these (below) with the only variations being cable length, and color. I bought two since the cables were extremely short. I spent about $7.00 total on them. Do these look like airplanes, or fish to you? 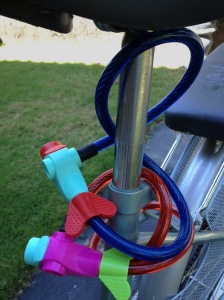