I always like to understand where I am, so I assume you do too? I still don’t know how to make photos come in larger. Please click this to see it full size.

I thought I’d let you join in the craziness of the indonesian rupiah (IDR). When I cash in $100, I am given back almost 1 MILLION rupiah. That translates as 10,000 IDR is about $1.00. This really messes with your mind for a while. You find yourself staring at a 5,000 IDR bill thinking it’s worth something, and it’s barely two quarters. So I took photos of a couple of the notes with the intent of using them in my blog for education. When I tried to pull the photo into Photoshop, I was reprimanded by the software with this message:

I won’t be showing you the notes. You’ll have to Google them yourself.

I Need My GPS

Thanks to a tip from a couple of ‘local’ australians in the restaurant the night before, I not only found out where the ocean was, but I found the fastest way there. Had I been left to my own devices I never would have made the trek to get a sunrise shot. My hotel is technically across the road from the beach, BUT, all the resort hotels on the beach side have property a good quarter-mile deep. So the trick is to figure out where you can get through so you don’t have to go clear to one end or the other where a street provides access. I was told to just cross the street, and then slightly to the right take the large driveway. Follow that to the beach and just act like I’m supposed to be there—

So, the guys were right. It’s a big, wide driveway thing. The gate threw me off though and I hoped I wasn’t wandering somewhere I shouldn’t.

Then came the green carpet. Kinda cool. But the paths kept getting smaller until I found myself in a maze of bungalows with tiny footpaths. Thank goodness  a guy just ahead of me was walking like he was ‘supposed to be there’ too.

He lead me right to the beach.

I’ve zoomed in here so you can see two things: 1) Rinjani Volcano in the distance,which is actually on Lombok, the island to the east of Bali, and 2) the boiling water in the distance. I can only assume there is a big drop off there because the water’s surface is totally different compared to the foreground.

A-ha! Those fireworks I heard last night? Now I know they came from waaaaay across the street.

These boats were all over the beach. Later in the day I saw this red sail boat – love it with those men fishing in the foreground with funky striped hats and poles.

Do YOU get what this sign means? Me either. 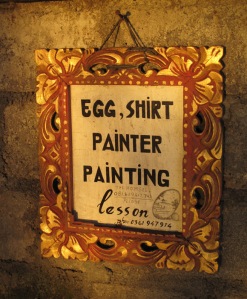 There is this brick walkway that runs several kilometers along the beach. I happened to walk behind these two men briefly and they were trucking along like anyone does who is out for their morning walk. If you look closely, I was attempting to show you that the guy on the left is shoeless. 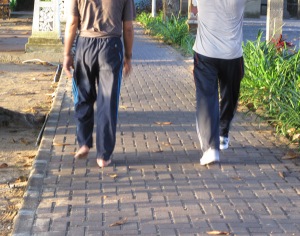 Tomorrow is a busy day. I’ll be picked up by the Australian woman at 9AM and taken to meet numerous artisans—then on to Ubud! (Oo-bood)

View all posts by jodyt2

One Reply to “Sunrise: Sanur, Bali”